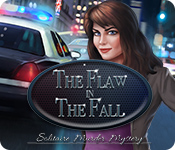 The Flaw in the Fall: Solitaire Murder Mystery

Tina Gomez fell from the balcony of room 1124 in the Regal Hotel. Was it suicide? Was it an accidental fall? Or was she pushed? Detective Captain Carrie Tucker is surprised to be called to work on a suicide case, but she needs to be sure it wasn’t murder. Work alongside her crack team to identify suspects, uncover clues, carry out interrogations and solve the mystery while completing challenging solitaire and hidden object puzzles!