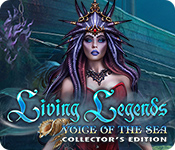 Big Fish Editor's Choice! This title was selected for its exceptional quality and overwhelmingly positive reviews from our Game Club beta testers. Friendly Fox invites you on the newest mystical adventure in the Living Legends series! Your brother’s invited you to Sunshine Island for Neptune Day! The festivities will celebrate the treaty between the Islanders and the people of the sea. But instead of a heartfelt reunion with your brother, you’re met with a curse that turns people into salt statues and monsters! Someone’s angered the Lord of the Sea and his daughters, putting the lives of everyone on the island at stake! Can you repair the rift between the two peoples to save your brother and the rest of the island in time? Find out in this breathtaking Hidden-Object Puzzle adventure. This is a special Collector's Edition release full of exclusive extras you won’t find in the standard version. As a bonus, Collector's Edition purchases count toward three stamps on your Monthly Game Club Punch Card! The Collector’s Edition includes: